Aji’s, chili’s, paprika’s, peppers, officially, “Capsicums” are my new obsession. They’re just too beautiful, so many shapes, sizes, and colors, not to mention flavors within the species. I’ve grown some sweet non-bell types but super-hots I’m afraid of after managing to mishandle the golden habanero twenty years ago, the pain memory has kept me away from hot peppers for a long, long time. Totally my fault, I bought them because they were cute, not knowing a single thing about them. Big mistake, which I paid for with severely swollen lips and burning fingers. I thought I’d die, I could not get rid of the burn.

Flashing back to when I was little, watching my father remove the seeds and membranes from Hungarian banana types, telling me they weren’t hot anymore…that worked occasionally, but that level of heat was minuscule compared to the flaming habanero.

Our favorite was the sweetest, crunchy, white Hungarian peppers my fathers family grew for generations for fresh eating. The other paprika types were grown in fields to harvest, dry, and make into powder. His town, Szababszallas, is right in the heart of paprika producing country. Szeged and Kalocsa are world-famous for the paprika powder they produce. That particular area of Hungary has the right amount of heat and light for Capsicum pepper plants to flourish, and every traditional Hungarian table is set with salt, pepper, and paprika.  The technique to use is to dip your (clean) knife tip into the powder, then sprinkle it onto your food by tapping the knife, which he did with surgical precision.  I don’t believe any country has embraced capsicum the way Hungary has. It’s almost in every soup and stew, smoked meats are cured with it, bacon is smothered and stored encapsulated in paprika powder, even the folk art and costumes are embroidered with flowers and pepper motifs. Hungary not only embraced the pepper but made it a national obsession. 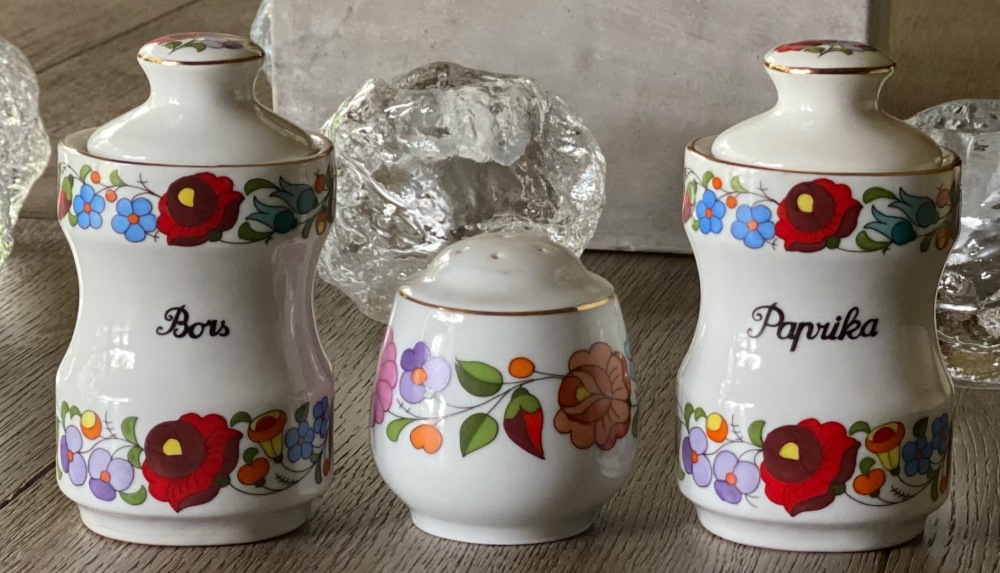 Try as I might, I will never have my Father’s skills as a gardener, though I love having fresh things growing, not to mention the taste and freshness of everything harvested as needed. I’ve wondered how he found his paprika seeds in New Zealand, where we emigrated during the Hungarian Revolution, he probably had some squirreled away in his clothing, but whether the seeds made it through the refugee camps, or he acquired them from other displaced Hungarians,  I was too young to even think much about it. Nevertheless, he always had paprika growing in our “garden”, or whatever small patch of ground he had available to him, even if he nurtured them in someone else’s garden he tended on the side. His garden was our mainstay and saved us many a time from going hungry while we tried to get on our feet in a very foreign country.  American families faced the same type of ordeal during the great depression, and that generation also counted their blessings if they had something growing in their “victory garden” or farm if they were so fortunate. My Father created many gardens over the years, and his pride and joy to grow was his sweet white “Feher paprika”.  He painstakingly selected seeds from the finest healthiest plants every season for the next crop. I always felt sorry for the weaklings he ruthlessly culled from the started seedlings, but he explained that our own well-being depends on the strength of these plants. We ate white peppers with everything, in scrambled eggs, with thinly sliced salami on bread, in chicken paprikash combined with onions to make a sauce that stretched a little chicken, with big dumplings into two family-sized meals, or just as a snack with salt to tide us over until mealtime.

Regularly, I was teased in school about my pepper and lard sandwiches, taunted that I’d eat grass like a sheep instead of real food, but I didn’t care, it was juicy and delicious and still one of my favorites with salt and butter now on fresh bread. Sometimes I did tear up some grass and throw it in my sandwich, just to make the nasty kids eating nasty marmite sandwiches cringe.

In the last three years (six growing seasons), I’ve grown jalapeno, ancho, Jimmy Nardello, healthy, sweet Jemison, orange sun, Corno di toro, Passila, Hungarian wax, and Feher Ozon, the family white pepper. Last year, a dear gardening friend sent me an assortment of Hungarian Paprika seeds, what an adventure that has become! I have made the most delicious salsa as well as dehydrated pepper flakes from these beautiful rich varieties. I have even ventured into the world of hot peppers (with great trepidation, gloves, and mask) because of the dimension they’re giving my papaya preserves when cooked down. I even purchased a few habanero’s to try. Cooking diffuses the intense sharp bite into a warming, mellow, olfactory mouth bloom that intensifies the flavor and increases the enjoyment time of that bite. It’s a whole new dimension of cooking for me and one I’m so excited to get into.

My capsicum seeds now have my “Scoville rating” notes on the envelope and half my pepper starts are hot varieties. It’s going to be a fun season. (Only one super-hot so far)

These are my first batches of dehydrated pepper flakes. The smell and flavor are as remarkable as the rich colors.